It was a beautiful day despite the early threatening wind that never developed into anything. It was a good day to have the last name of George, Steve took first and Chris second. Chris had a big floater but was held to a 100M launch height as a handicap. Third was Mike Wilson.  Atta boys all around.

Steve and Chris beat each other up at home too. Here Steve beat Chris by .6 of a point!!

Next contest will be April 13 and Daryl will be CD. Pilots meeting at 9:00

There will be an Aerotow fun fly at Santa Margarita Ranch on Thursday April 21 probably starting at 10:00 am and running most of the day. There will probably be some 5 meter gliders and 1/4 scale tow planes so it will be something to see. All club members and guests are invited. Thursday and Friday will be prep day for the F3J contest to be held Saturday and Sunday. Again all club members are invited to watch, help or whatever…. 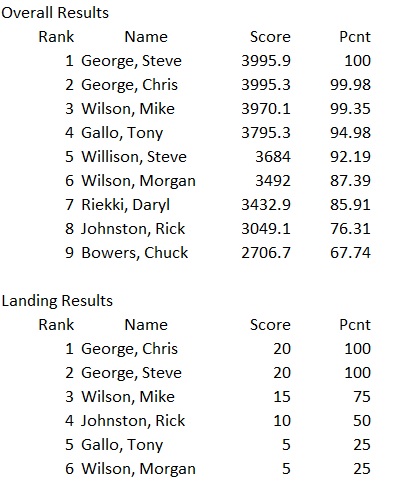