Meeting brought to order at 9:30 by President, Tony Gallo.

Members were commended for using verbal cues and responses as to their flying intentions. Recently posted signs have been mostly obeyed as to 3D, acrobatic, and high speed passes being made beyond the far side and the full length of the runway.   Clarification was required to explain that all of the above activities will be beyond the width of the runway for its full length, not just 50 ft. from the pilot.  (See the diagram below for the appropriate 3D, aerobatic and low fly areas.) 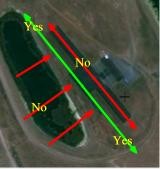 Nominations will be made at the November meeting. Bill Lander requested that someone needs to take over the Treasurer position in the next few years.  That person will require  in service to become familiar with the treasurer’s duties.

Bill Lander presented the report along with a proposed budget for next year.

Meeting was adjourned at 9:54.